Born and raised in Venice, Italy, Alex Masi was exposed to music early on in life with his parents playing classical music and jazz records around the house. Alex first got interested in the drums, then piano, which he studied for a few years—until he saw Ritchie Blackmore on a TV show, that was a life changer.

Alex later graduated from the Verona Conservatory of Music in theory and harmony while at the same time starting to play rock and jazz fusion with various Venetian bands. In 1982 he relocated to London, UK, to play with several upcoming acts in the scene of the new wave of British heavy metal. The London winter turned out to be too hard to handle though, and Alex returned to Venice where he formed Dark Lord, a band with which he stayed for four years. Dark Lord released two EPs and toured constantly, opening for bands like Saxon, Motorhead, The Cult, etc.

In 1986 Alex Masi was asked by Metal Blade Records to move to Los Angeles, California, to join an already established band called Sound Barrier. After a couple of months in LA, the label decided to rename the band, and Masi (the band) was born.

Masi recorded two albums, “Fire in the Rain” and “Downtown Dreamers,” the latter including the single “God Promised a Paradise,” which became a solid success on rock radio. The video for the single was on  heavy rotation on MTV alongside heavy hitters such Guns & Roses, and is still played today on VH1 Classics.

During the 90s, Alex released a couple more albums under the Masi name (on smaller indie labels) but in 1997, the idea of recording a tribute to one of his biggest influences, Johann Sebastian Bach, became a reality and “In the Name of Bach” was released. The "Bach album" turned out to be a massive success, both critically and with fans worldwide, and it put a new label, Lion Music, on the map. Two more classical albums followed, “In the Name of Mozart” and “In the Name of Beethoven. All of them were highly praised by music lovers all over.

In 2006, Alex published a new instrumental album called “Late Nights at Desert Rimrock,” which marked the birth of a new direction, more inclined to improvisation and world influences. 2010 saw the release of “Theory of Everything,” another solo album in yet another brand new direction, this time with the influence of electronic music. Although electronic sounds played a big role in the writing, the guitars on the record were as massive and insane as ever.

Alex Masi has been touring all over the world since 1984, and is not stopping anytime soon! A few of the people Alex has either recorded or performed with: Carmine Appice, Rudy Sarzo, Allan Holdsworth, Steve Bailey, Ray Gillen, Shawn Lane, Snoop Dogg, Joseph Williams, T Lavitz, Jeff Pilson, and Michael Schenker.

Alex Masi has a number of new projects coming up in 2011, a collaboration with singer Burnie K from the Sound Barrier days. This will be a heavy rock / heavy funk / psychedelic disc that will freak out audiences all over the world! A new solo album is also near completion, to be entitled “Out of Your Mind is a Beautiful Place To Be,” which will get a much bigger release on a new, undisclosed (for now) label. Wild, energetic, new, insane music.

"Ever since I got the DV Mark combo I've been addicted to it, both in the studio and live! " says Alex. "Its flexibility, great tone (clean and overdriven), amazingly useful onboard features, and light weight make it the ideal amp." 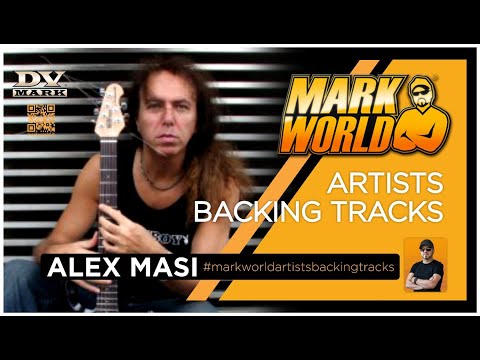